Touch the Past, Embrace the Future

Touch the past, embrace the future... and why I did not write a blog post for a whole year.

2018 brought many amazing blessings, miracles and triumphs.  But it was not without more than our fair share of trials and tribulations.  As we encountered health battles, home disasters, family breakups, death of loved ones to cancer, and crisis after crisis with Dakota, and health worries with other family members. It was in my humble opinion the year from hell.  What could go wrong, did.  And that is when we truly discovered who our true family & friends were.  Those who showed up, and stepped up.  And those who... well.... didn't.  Our yellow family will always be our family.  My Mom will always be my rock, and my security.  And those who came in and helped, our gratitude is infinite.  André the love of my life, has made my life so much easier in so many ways, and yet he still lets me go and be the crazy kid that I am!

As 2018 began, we had just received news of André's stage 2 colon cancer and were awaiting surgery at the MUHC.  It was only a few weeks earlier that we had discovered that he had cancer.  He was not "well",  and acting a whole lot older than his chronological age.  There were signs that there was something "off" but we could not figure it out.  A simple blood test a year earlier would have prevented all of this had he been followed.  Unfortunately it was not the case, and we ended up taking him into the ER after he passed out in the waiting room of Timberlea Veterinary clinic.

The same day we took André into the emergency room, we came home to find that André had forgot to go down in the basement and close the pipes to the outside for the winter.  They froze and burst leaving us with a $25,000.00 flood in our basement.  A total loss.   Renovations were delayed until André had recovered from surgery, which he quickly did.

As soon as the surgery was done, and we were settled into our new routine, the contractors showed up for the renovations.  We lost 50% of our home and our belongings in the flood.  It was horrible and extremely stressful.  We were blessed to have an amazing friend who is a contractor step up to do the work.  André and I both helped out with the renovations as much as we could.  The basement was a finished basement, so we had to gut everything down to the cement and studs and begin from scratch.  Our finished basement was now a pile of cement rubble.  We had to have the foundation floor jackhammered to remove blocked pipes.  Remember, this is winter, and this is Canada.   The constant noise for 8+ hrs a day, 7 days a week left for few peaceful moments.  How to find peace in the chaos was a challenge. 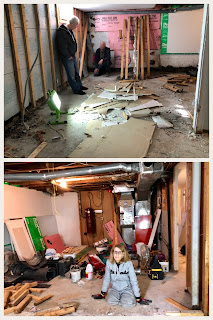 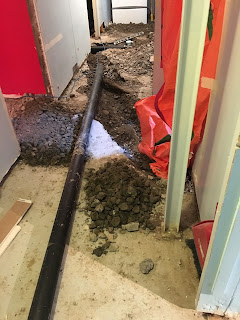 All of our family photo albums, files, years of paperwork, gone.  Souvenirs and mementos from a lifetime, gone. Trying to remember what was there was near impossible under the stress.  Clothing, items stored for the children, everything one has in storage, or in a family basement was ruined.  The mould had spread, and everything had to be destroyed.  We were just fresh out of surgery and facing months of demolition and rebuilding.  It was draining both emotionally and financially.  Insurance was not going to give us what we lost.  It covered a good part of the renovations.  Even with that we were still out thousands of dollars.  The contractor took a loss, we needed financial assistance, and it all came together in the end.  If I had only had a crystal ball, to know in the end we would end up with a beautiful new basement!  And just in time for our special guest Peggy in May! :) 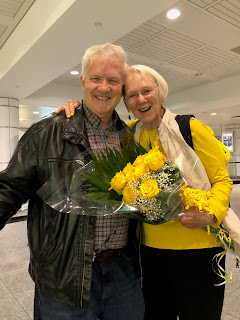 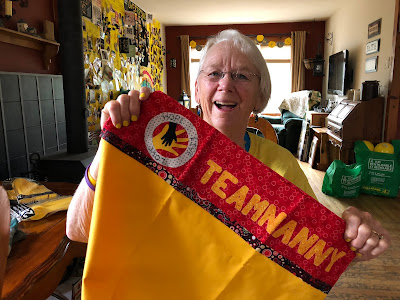 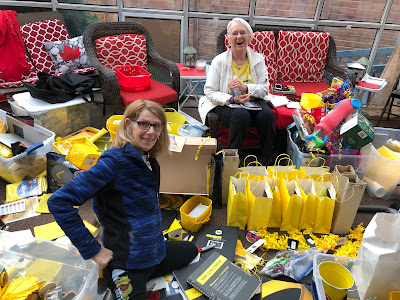 Peggy Watterson flew all the way from California to be with us during the 2018 TEAMNANNY event!!! What a special time that was for us.  Saying "au revoir" was so hard.  LOVE U PEGGY!

All the time this renovation was happening, so were busy with multiple other things that needed to be done at the same time.  I was still battling it out in reviews with the SAAQ about my car accident three years ago.  I was still working through another Lupus flare that did not want to end.  Dakota needed treatment, crisis control even, until we finally ended up at the DMV...  and his new normal.  Which is both financially a huge strain on us and emotionally killing me watching him suffer and taking over 400 days before we could help him feel better in his own skin.
Immediately after André’s cancer surgery we were planning and preparing for our
annual TEAMNANNY cancer fundraiser, benefiting the LIVESTRONG Foundation and local cancer organizations.  My sweet neighbour and one of my best friends, Sandy, was just diagnosed with terminal stomach cancer.  We had just lost another neighbour to cancer, Gary.  He was such a sweet man.   I felt like I was in a sinking ship.  It was difficult to stay focused.  Battling Lupus, PTSD and a myriad of other health issues myself,  it was a struggle to get up and get moving every single day.  André was supposed to “recover” and work on getting better slowly… But we had no choice.  Somebody had to be able to keep this ship afloat during all the renovations, and that somebody was the two of us.  I had now committed myself into many different directions all at the same time.  Something one living with chronic illness should never do.  But it was unavoidable.  I was out of spoons with a husband fresh out of surgery.  It was a slippery slide for the rest of the year.   Mom got sick, (then got better, phew)… My friend lost her father, another friend lost her mother.
After completing the renovations, hosting a successful TEAMNANNY cancer event raising thousands of dollars for cancer organizations, Dakota’s journey with Zinc Responsive Dermatosis, family drama, I was running out of spoons.  Fast.   No I was out of spoons months earlier.  I just finally admitted it.

Here is the amazing photo album from last years event::::  (NOTE: There will not be an event in 2019! Thank you all for the years of support!)

What followed was my new hope for a future that I thought the car accident had taken from me.  The Canadian government announced that Cannabis was now going to be legal in Canada.  Are you kidding me? The same drug that killed my daughters brain cells was now going to be available to teens everywhere?  I was worried.  I expressed my fears to friends, and then I was educated.  WOW.  I had no idea.  CBD oil.  It was literally a game changer for me.  After learning that it is harmless, that I would not overdose on my drugs if combined with it, etc, I gave it a trial period.  In just days most of my inflammation was so much less.  I was moving better than I had in weeks, months, or a year or two!  Suddenly I could skateboard distance again.  I could sleep.  I could swim.  I could garden.  My yoga improved.  I  could do so much more than before.  My chronic pain was mostly under control.  In my body, it is always about lessening the pain.  I will always have some pain, 24/7.  Just now it is more livable.  I use yoga as my go to every day practice to help this body keep moving.  Then I build on that with strength & balance training.  I have discontinued many of my prescription pain medications since starting the cannabis.  I am using cannabis medically, being followed by a specialist at Santé Cannabis, and she is amazing.  She was thrilled at my followup when I showed her my snow skate video on you tube.  I have more endurance than ever before!  There is a patient assistance program for low income families that we easily qualify for, which helps offset the cost.  It is my hope that soon I will have Dakota’s illness under control, and that I can begin the journey in my legs again.  That takes hours of physiotherapy.  So it has been on the shelf since he went into crisis mode, and it now looks like it may happen this spring.


I was glad to say goodbye to 2018 and all the pain that it brought into our family.

This has been one hell of a roller coaster ride.  I have been inspired by those who have crossed my path from around the globe.  I have my supporters who I live to inspire another day.   Life is a journey.  After 26 days into 2019, I have made some decisions that will help guide me throughout the year.  I have decided that I need to take care of my health first and foremost.  Because without it I cannot care for André and Dakota in the way they deserve.  They deserve the best of me, and that was less than acceptable as we ended 2018 in my eyes.
This means get the physical therapy done.  Get to bed on time and quality sleep.  Do not miss a day of yoga.  Eat well. And PLAY.  Yes play. I want to walk, and climb, and dance, and skate.  I want to PLAY.  Because those are the memories I will create moving forward.  Priceless moments with those I love.  NO DRAMA.  I have had enough for a lifetime.  Check the drama at the curb, please.  I LOVE our new yoga studio.  GOOD VIBES ONLY!! Namesté 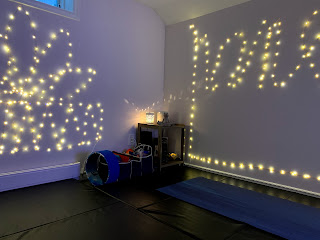 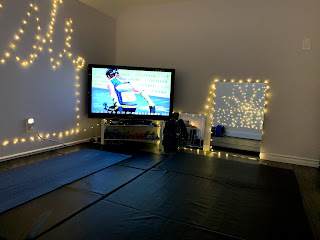 Teaching kindness is something I have been working hard on the past few years, through my social media sites.  The world is an amazing place, but we are constantly hearing about all the wrong there is in the world.  And I get it, after experiencing people who could not get along in my own family.  That is completely insane IMHO.  We are all on the same team.  Let us be the light to uplift others.  DO NOT take away a moment of somebody else's happiness.   You have no right.  I have no right.  We can only teach kindness though kind acts!

To counter that I am on a kindness mission of sorts.  We have to be kind to one another.  It is the only way that change will happen across all borders.  With love and acts of kindness we can make a difference.  And the kids know this.  They cannot be reminded enough as they are constantly bombarded through their “devices” with world news as it happens, and often that means another attack on humanity.  When you are kind to someone, it feels good.  It feels right.  And that is what I want this amazing team of mine to always remember.  In a world where you can be anything… BE KIND! 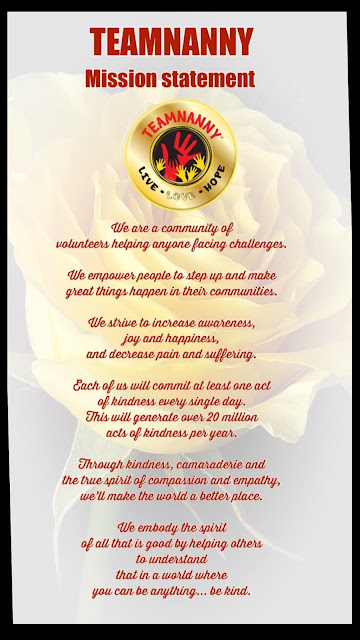 *Love* & *Light* has been my signature for the past 20 years,
and may it continue to help lead you when darkness comes.
Namesté

TEAMNANNY videos on You Tube (Walking and Skateboarding) 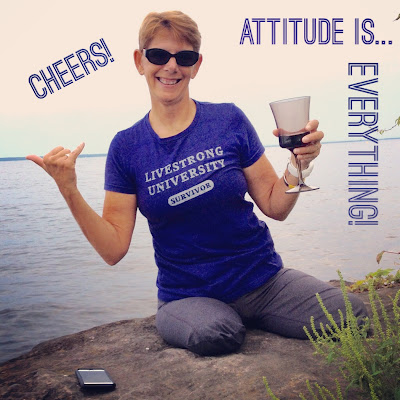